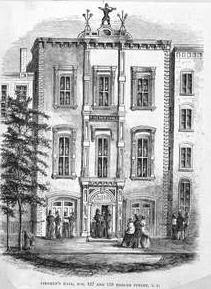 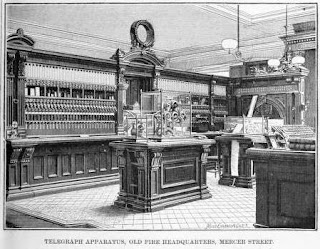 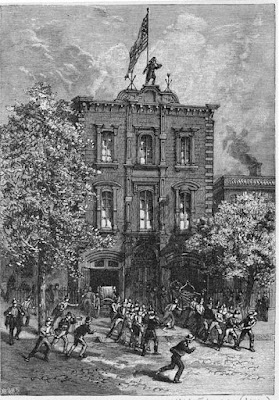 If these walls could talk- there are many buildings that have been around since before the paid Fire Department of the City of New York was organized that are still being used today. Then, there are some, no longer firehouses but still hold it's history inside the 4 walls. 1 building in particular at 155 Mercer Street, still shows signs of what it once was, 'Fireman's Hall'.

Present day 155 Mercer Street is a clothing store with bright lights, but if you look beyond that, on the front facade, you can still see 'Fireman's Hall' carved into the building, spelling out it's rich history. January 6th, 1854, construction contracts were signed to build a new Fireman's Hall to replace the old building. A box was placed into the cornerstone containing the history of the New York Fire Department since 1816, a history of the old Fireman's Hall, a bible, a copy of the US Constitution & a score of other documents including copies of the local newspaper.

The ground floor would house New York Hose Company 5 & Ladder Company 6 of the Volunteer Department. Each company is to have 15x90ft, which will be divided in 3 rooms. The front room for the apparatus, the centre room for their meetings & the room in the rear for sitting & reading.

The 2nd floor would contain a large meeting room, 38x71ft for meetings of the representatives, engineers & foremen, & the Exempt Firemen's Association. The 3rd floor held an identical sized room used as a library & reading room & smaller rooms for the librarian & committees.

The front of the building is to be Connecticut brownstone, cut in the best manner. The style of arcitecture is Italian, or composition of Greek & Roman details applied by the Italians to modern buildings.

Who was Edward Croker?

A search of famous firefighting quotes will turn up Edward F Croker at the top. Croker sure had his way words for the fire service, but who was he?

Edward Franklin Croker was appointed to the FDNY on June 22nd, 1884. He was only 21 years of age. Just shy of 50 days on the job, Croker was promoted to Assistant Foreman (Lieutenant), and again, another promotion a mear few months later to Foreman (Captain) of Engine 1. Croker's uncle, Richard Croker, was Fire Commissioner from 1883 - 1887, and one of the most powerful political figure in New York City as the head of Tammany Hall. In it's early years, the City was growing as was the need for the Fire Service. Edward Croker proved to be a great firefighter and through his career, a great leader. January 22nd 1892, Croker was promoted to Battalion Chief. May 1, 1899 he was appointed Acting Chief of Department and June 29, 1899 named Chief of Department. Many thought Croker's ties with Tammany Hall was a stepping stone, potentially to Mayor. Croker denied any ambition with the following stirring words:

“I have no ambition in this world but one, and that is to be a firefighter. The position may, in the eyes of some, appear to be a lowly one; but we who know the work which the firefighter has to do believe that his is a noble calling. There is an adage which says that, "Nothing can be destroyed except by fire." We strive to preserve from destruction the wealth of the world which is the product of the industry of men, necessary for the comfort of both the rich and the poor. We are defenders from fires of the art which has beautified the world, the product of the genius of men and the means of refinement of mankind. (But, above all; our proudest endeavor is to save lives of men-the work of God Himself. Under the impulse of such thoughts, the nobility of the occupation thrills us and stimulates us to deeds of daring, even at the supreme sacrifice. Such considerations may not strike the average mind, but they are sufficient to fill to the limit our ambition in life and to make us serve the general purpose of human society.”

Chief Croker did his best to modernize his department, donating the 1st motorized chief's car and attempted to streamline communications between firemen during emergencies.

He was an outspoken advocate of improving fire safety throughout the city's commercial and residential buildings. He warned that many of the buildings around the city that housed manufacturing operations were disasters waiting to happen. In 1894, he testified before the Tenement House committee that a fatal fire was due in part to "the combustible nature of the building and it's open construction." His unheeded warnings were personified on March 25th 1911 at the Triangle Shirtwaist fire. After the Triangle Waist Factory Fire, suspecting that he could do little to advance his cause within the politicized tangle of government red tape, Croker turned over his command to Deputy Chief John Kenlon at 8:00AM. Edward F. Croker served twelve years the Chief of the New York City Fire Department and for twenty-seven years as an active fireman. Croker’s twenty-seven years of service had seen the administration of twenty-two Commissioners. Croker spent the next 40 years in fire prevention, his company was a leader in Fire Prevention and exists today. (https://www.crokerfiredrill.com/ ). In 1914, Croker built a completely fireproof house in Long Beach which still stands today at 116 Lindell Blvd corner of West Penn Street. This was said to be the 1st of it's kind. His house warming party was covered by the New York Times. According to the Times' story, Croker brought all of his guests to the 2nd floor of his home, where the walls, floors and rafters were made of cement, the doors, trimmings and furniture of metal and interestingly enough, the carpets and furniture coverings of asbestos. He poured a few gallons of gasoline into the room, lit a match then shut the room's metal door and dined with his guests in the next room. The fire was confined to the room and beyond a reported crack in the metal wire of the room's window, the room remained undamaged.