History of the Fire Service in NYC

The history of the Fire Service in New York began in 1648 during the administration of Governor Peter Stuyvesant, when the first fire ordinance was adopted by the Dutch settlement of New Amsterdam. The act required that funds received from fines levied for dirty chimneys should be used for the maintenance of buckets, hooks & ladders. It also established a fire watch of 8 wardens & required that each male citizen stand watch in turn.

The duty of the first fire wardens was to inspect the chimneys from Fort Amsterdam to the fresh water pond at the northern boundary of the settlement a mile away.

The first fire company was organized in 1657 and equipped with 250 leather buckets made by a New Amsterdam shoe maker.

In 1731, 74 years after the first fire company began service, the schooner Beaver brought from London, 2 hand-drawn pumpers, the first fire engines used in the colony. These engines were stationed at City Hall, then Wall & Broad Streets designated Engines 1 & 2. All able bodied citizens were required to respond to alarms of fire and to do duty under supervision of the aldermen.

December 1737, the General Assembly of the Colony passed an act which established the Volunteer Fire Department of the City of New York which operated under this name for 128 years. The act provided for the appointment of able, discreet and sober men who shall be known as Firemen of the City of New York to be ready for service by night and by day and be diligent, industrious and vigilant.

Following the Revolutionary war, the department was reorganized and incorporated in 1798. The dedicated and heroic service of the Volunteer Fire Department protected the lives and property of the citizens of the City until superseded by the paid Metropolitan Fire Department after the close of the Civil War in 1865.

When mustered out of service, the Volunteer Fire Department consisted of 52 Engines, 54 Hose and 17 Ladder companies, 16 chief officers and 3,778 company officers & firemen. Most of the officers & men of the new paid service were recruited from the ranks of these volunteers.

The Metropolitan Fire Department. With the induction of steam fire engines in the 1850’s, hand-drawn/operated fire apparatus became obsolete, spelling the doom of the volunteer fire service in larger cities. Cincinnati, St Louis, Baltimore & Boston already adopted the system of steam fire engines & paid firemen. March 30th 1865, the New York State Legislature passed “An act to create a Metropolitan Fire District & establish a Fire Department therein” section 23 Charter 249 of the laws of 1865. The Metropolitan Fire District included the City of New York, City of Brooklyn and provided for immediate assumption of control of the volunteer fire departments of the City of New York and the Eastern and Western Districts of the City of Brooklyn. The Eastern District included the former City of Williamsburg and the town of Bushwick, which had been annexed by Brooklyn in 1853 and the Western District embraced the balance of the City of Brooklyn which then only covered about half of Kings County.

The volunteer companies began to fall into line and by the following day, reports were being received that they were ready for service until relieved by paid units. The first paid company, Metropolitan Engine Company 1, went into service July 31st 1865 at 4 Centre Street. Their apparatus was a steam fire engine and a hose tender, drawn by horses. The company consisted of 2 officers, engineer, stoker and 8 firemen. This was the standard set up for all engine companies of the Metropolitan Department. Ladder companies consisted of 12 officers and firemen, and were equipped with a horse drawn ladder truck. The men of the uniformed force were on continuous duty, with 3 hours a day for meals and 1 day off a month. A total of 34 Engines & 12 Ladder companies had been organized on a full paid basis when the paid service was complete on December 1st, 1865. 13 Chief Officers, 430 company officers, engineers and firemen.

In the beginning, the full paid service extended only to 86th Street. The rest of the City north to the Harlem River was protected by 5 Engines & 3 Ladders designated as ‘Suburban Companies’, each equipped with hand drawn apparatus and receiving a fixed annual sum for their services. On January 1st, 1868, these suburban units were replaced by full paid companies with horse drawn apparatus, and the coverage of the entire city of New York was completed.

City of Brooklyn. The Metropolitan Fire District Act gave the commissioners jurisdiction over Eastern & Western Districts of the City of Brooklyn but beyond receiving reports from the officials of the Eastern & Western District Fire Departments, the Metropolitan Board did nothing to establish a paid service in Brooklyn. The citizens and firemen soon began to express dissatisfaction with the set up and efforts were made to have the Legislature change the law. These efforts were not successful until 1869, when ‘An Act to Reorganize the Fire Department of the City of Brooklyn’ was passed and signed by the Governor on May 5th. May 22nd, 1869, the board of Fire commissioners for Department of Fire of the City of Brooklyn was organized and rapidly formulated plans for a full paid department of 13 Engines and 6 Ladder companies which replaced the Eastern & Western District volunteers on September 15th, 1869.

The City of Brooklyn and it’s Fire Department had a remarkable growth in the 28 year period from establishment of the paid Brooklyn Fire Department to consolidation with the City of New York. The territory protected was greatly enlarged by annexation of theh 5 towns which took in all of Kings County outside of the city limits of 1869, the 19 fire stations of 1869 increased to 70 and the uniformed force grew from about 200 men to more than 1,000.

Growth. The ‘Tweed Charter’ of 1870 replaced the Metropolitan Fire Department with the Fire Department of the City of New York, effective April 11, 1870. The Department became municipally controlled organization with commissioners appointed by the Mayor. The principal visible change seemed to be the relettering of apparatus from MFD to FDNY andn adoption of the present design of firemen’s badge and cap device.

Annexation of the Westchester. Territory north of the Harlem. Westchester County bordered Manhattan island with the Harlem River as the dividing line until January 1, 1874. The passage of Chapter 613 of the Laws of 1873 the New York City limits were extended north and west to reach the corporate lines of Yonkers and Mount Vernon and eastward to the Bronx River taking from Westchester County the towns of Morrisania, West Farms and Kingsbridge which embraced the Villages of Mott Haven, Port Morris, Hunts Point, Highbridgeville, West Farms, Tremont, Fordham, Woodlawn Heights, Kingsbridge and Spuyten Duyvil. On annexation, 6 Engines and 2 Ladder companies were organized to replace several volunteer departments. The new 10th Battalion took in all of the territory from Harlem River to the northern city limits and the Battalion Commander called for his horse and saddle when duty called him to answer an alarm or make an inspection trip. In 1895, expansion of the City and County of New York to east of the Bronx River with the annexation of the Villages of Wakefield, Unionport, Westchester and Williamsbridge. 4 paid engine companies took the places of the volunteers in these villages. When the Greater City came into being on January 1st 1898, the fire force in old New York City and County (Now Manhattan and the Bronx), consisted of 3 Divisions, 14 Battalions, 64 Engines (3 of them Fire Boats), 22 Ladders, 6 Chemical Engines, 3 Water Towers and 25 Fuel Tenders. 9 Engines and 1 Ladder were double companies.

On the other side of the East River and New York Bay, the paid Fire Departments of Brooklyn and Long Island City brought into the FDNY on consolidation a total of 53 Engines, 10 combination Engine & Ladder, 2 Fireboats and 17 Ladder companies. Brooklyn also had a water tower and several chemical engines attached to other units.

Fire Department of the Greater City. 1898 heralded the formation of the Greater City, an era had ended and the Department was embarked on it’s tremendous task of merging 3 paid departments and coordinating and supervising the equipment and activities of 21 volunteer fire departments with 119 companies and more than 1400 members. There were 10 separate fire alarm systems, no standardization of apparatus and equipment, civil service regulations varied widely; the salary schedules of New York, Brooklyn and Long Island City were so far apart for the different ranks that firemen in New York received more pay than company officers in Long Island City. There were countless rules, regulations, ordinances and laws to be put into workable codes and manuals. The single fire commissioner of New York assumed, overnight, the responsibilities of not less than 20 superseded officials. The new charter also charged the Commissioner with the responsibility of extending the paid service into approximately 175 square miles of new territory which had been protected by 119 volunteer fire companies into 21 separate departmental organizations.

Richmond and Queens, which in 1898 were almost entirely protected by volunteers with hand and horse drawn apparatus- a professional firefighting force of 103 engine, ladder, marine & rescue companies with more than 3,000 officers and men had been established. In addition to the 103 companies of the paid department placed in service in Queens and Richmond since consolidation, 94 additional companies have been activated in Manhattan, Bronx and Brooklyn, giving the Department a total of 215 Engines, 130 Ladders, 9 Marines, 9 Squads and 4 Rescue Companies stationed in 280 houses throughout the 5 boros.

Motorization of the Department. October 1872, the first Amoskeag self-propelled steamer was assigned to Engine 31, it’s tender being a horse drawn hose reel. 4 more Amoskeag self-propellers were purchased in 1874 and for the next 10 years were the largest pumping engines in the FDNY. Expensive to maintain, the self-propellers were retired to reserve service in 1886. The first automobile used in the Department was a Locomobile steam carriage, purchased in 1902 by Chief Edward F Croker to replace the horse drawn buggy assigned to the Chief of Department. Chief Croker’s buggy is now in the Fire Museum. Motor propelled fire apparatus was introduced into the FDNY late in 1909 when a Knox high-pressure hose tender was installed at Engine 72. After a year’s trial, the commissioner reported “the Department is now preparing to install motor-driven apparatus as rapidly as possible”. The initial extensive purchase of motorized apparatus was made in 1912. 3 years later the department was 50% motorized with 283 pieces of automobile equipment and 280 horse drawn apparatus.

December 20th, 1922, Chief ‘Smokey Joe’ Martin stood in front of Borough Hall, Brooklyn and transmitted signal 5-93-205 (5 = Special call Engine, 93 = Box #, 205 = Engine Company). It was a signal that was to mark the end of an era. In company quarters on Pierrepont Street, the 5 horses ran to their places, 3 to the steamer and 2 to the hose tender, and in less than 20 seconds from the first tap of the bell, the company was on it’s way to Box 93. There was no fire. With motor running, a new pumper stood at the curb bearing the number 205. In a few short minutes, it would back into the Pierrepont Street station and the Fire Department would be 100% motorized. 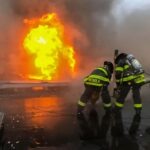 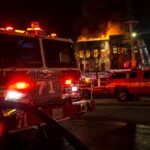 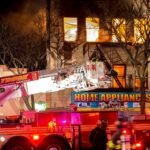 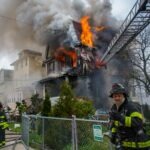 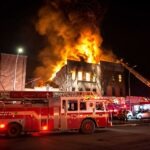 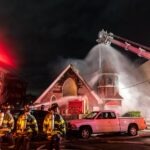 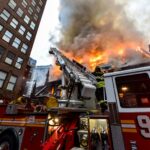 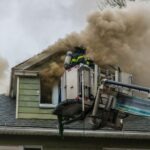 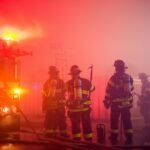