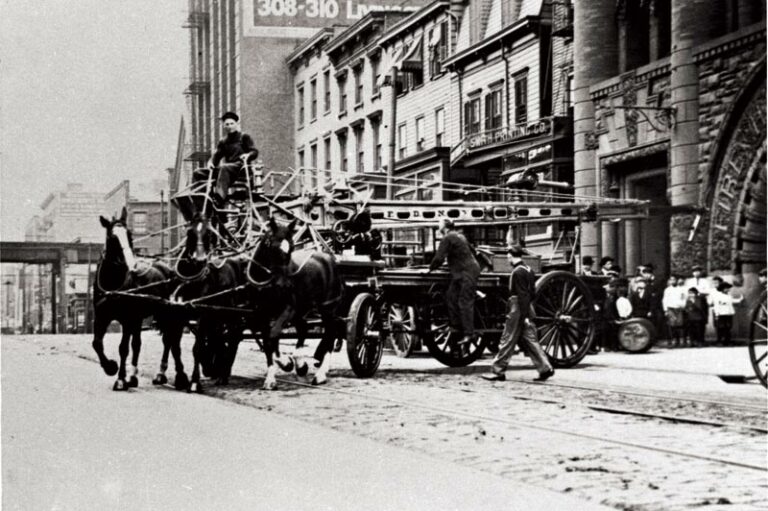 The history of the Fire Service in New York began in 1648 during the administration of Governor Peter Stuyvesant, when the first fire ordinance was adopted by the Dutch settlement of New Amsterdam. The act required that funds received from fines levied for dirty chimneys should be used for the maintenance of buckets, hooks & ladders. It also established a fire watch of 8 wardens & required that each male citizen stand watch in turn.

The duty of the first fire wardens was to inspect the chimneys from Fort Amsterdam to the fresh water pond at the northern boundary of the settlement a mile away.

The first fire company was organized in 1657 and equipped with 250 leather buckets made by a New Amsterdam shoe maker.

With the induction of steam fire engines in the 1850’s, hand-drawn/operated fire apparatus became obsolete, spelling the doom of the volunteer fire service in larger cities. Cincinnati, St Louis, Baltimore & Boston already adopted the system of steam fire engines & paid firemen. March 30th 1865, the New York State Legislature passed “An act to create a Metropolitan Fire District & establish a Fire Department therein” section 23 Charter 249 of the laws of 1865. The Metropolitan Fire District included the City of New York, City of Brooklyn and provided for immediate assumption of control of the volunteer fire departments of the City of New York and the Eastern and Western Districts of the City of Brooklyn. The Eastern District included the former City of Williamsburg and the town of Bushwick, which had been annexed by Brooklyn in 1853 and the Western District embraced the balance of the City of Brooklyn which then only covered about half of Kings County.

The Metropolitan Fire District Act gave the commissioners jurisdiction over Eastern & Western Districts of the City of Brooklyn but beyond receiving reports from the officials of the Eastern & Western District Fire Departments, the Metropolitan Board did nothing to establish a paid service in Brooklyn. The citizens and firemen soon began to express dissatisfaction with the set up and efforts were made to have the Legislature change the law. These efforts were not successful until 1869, when ‘An Act to Reorganize the Fire Department of the City of Brooklyn’ was passed and signed by the Governor on May 5th. May 22nd, 1869, the board of Fire commissioners for Department of Fire of the City of Brooklyn was organized and rapidly formulated plans for a full paid department of 13 Engines and 6 Ladder companies which replaced the Eastern & Western District volunteers on September 15th, 1869.

The ‘Tweed Charter’ of 1870 replaced the Metropolitan Fire Department with the Fire Department of the City of New York, effective April 11, 1870. The Department became municipally controlled organization with commissioners appointed by the Mayor. The principal visible change seemed to be the re-lettering of apparatus from MFD to FDNY and adoption of the present design of firemen’s badge and cap device.

Read more on the Annexation of Westchester, Fire Department of the Greater City, Motorization of the Department, and more on the history of the FDNY on our Historical Page.