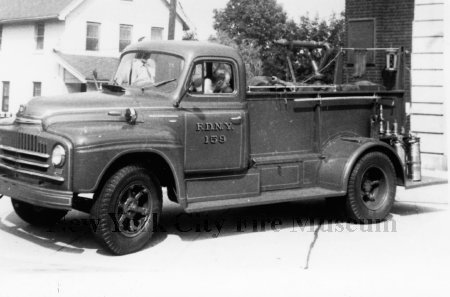 While operating a handline, the 3 firemen were buried beneath a collapse of the south wall of 444 Broadway. Their comrades immediately went to work to rescue them. After considerable labor, they were brought to the street in the following condition: FF Clute & Muldrew were dead & Asst Foreman Bush was critically injured, he died February 11th.

FF Stanton was deployed with the Army when he was called for the Fire Department, he was assigned Military Service Unit. He was assigned to the 310 Infantry Regiment, 78th Infantry Division in the US Army. He was killed in Schmidt Germany.

2 members from Ladder 143 & 1 member from Engine 285 were crushed when a fire weakedn roof containing a large air conditioning Unit came down on them & 6 other firemen. The 3 Alarm fire was in the rear of a restaurant & spread to adjoining buildings. The roof came down with out any warning & buried 9 firemen under tons of burning debris. Lt Beetle was 54, a 29 year veteran, recently remarried with 3 grown children. FF Skinner was 55 years old & a 21 year veteran with 2 children. Both of their grandfathers served in Ladder 143 over the years. Fireman Earl was the youngest at 42 years old & had 11 years on the job, married with 5 children. FF Skinner’s grandfather served in Engine 285 as well.