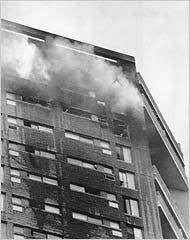 March 22nd, 1987- a fire in a Harlem residential high rise shaped the way the FDNY operates at high rise buildings today. Lessons learned from this fire can apply to both firefighters & the public.

Schomburg Plaza, a 35 story residential high rise building located at 1295 5th Avenue in Harlem section of Manhattan was built in 1975. The plaza is located on the northeast corner of Central Park. The 2 35 story towers 100×100 & 11 story rectangular slab are all clad in reinforced concrete & are separated by a landscaped multi-level outdoor plaza.

On March 22nd, 1987 at around 7am, trash was ignited in the compactor chute of one of the towers. Investigation revealed, the 1st odor of smoke from the chut was at 7am, however, the 1st call to 9-1-1 came in a 7:57am, an hour later. Upon arrival of 1st due companies, they were informed by maintenance personel that there was a small fire was located in the basement compactor room & that it was already being extinguished. However, the fire was later found to have started in the chute between the 27th & 29th floors. It then spread upward through the chute, an adjacent pipe chase, construction openings & ultimately through the interior walls of apartments adjacent to the chute. While fire operations were focused on the basement room, this led to the delay in rescue & extinguishment efforts on the upper floors. According to the USFA report, it took 16 minutes after arrival at the scene to discover the fire on the upper floors. This was 9 minutes after Rescue was released to return to quarters because it was throught the fire in the compactor chute was out. The dispatchers mistakenly informed all residents that the fire was being handled. Callers were not adequately questioned as to their circumstances. They did not relay the quantity of calls being received from occupants from the 15th – 33rd floors in the 10 minutes before the Chief decided (8:07am) that the fire was out & started returning companies.

Fire Code: Each code specifies a fire-resistance rating of 2 hours for shaft enclosures in all non-combustible construction. The “as built” plans for Schomburg Plaza specify 3 inch enclosure walls for the compactor shaft. Such a design, if properly constructed, would comply with both State & City codes. However, examination of the shaft disclosures that it was not built according to plan. The wall assembly was 2 5/8 inch thick, not the 3 inches called for in the “as built” plans. Also discovered on the 29th floor was a missing chute hopper door & missing door on the compactor closet leading to the hallway.

-Into kitchen area of apt 23H, 33H & 34H via convection & radiation transferred through construction openings & via conduction through various metal pipe support brackets & chute anchors, there after extending throughout above apartments.

-Extension to apartment 35H was via auto-exposure from 34H

At high rise fires today, you will hear the dispatchers give every single apartment to the Incident Commander. All reported apartments are checked, all stairways & public hallways are also searched.