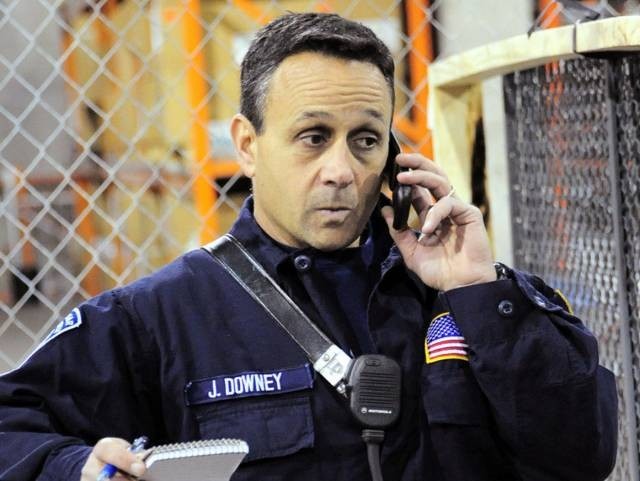 FDNY Battalion Chief Joseph Downey is only doing what his hero father did before him.As fellow family members of FDNY Deputy Chief Ray Downey mourned his loss Tuesday on the anniversary of 9/11, the younger Downey led a task force to North Carolina in advance of Hurricane Florence.“It’s a somber day, but we have to look at it as we’re doing the right thing for those we lost and our loved ones,” said Joseph Downey, leader of the Urban Search and Rescue New York Task Force. “We’re first responders. . . . We’re always there to help people, in the city or somewhere else.”Downey and an 82-member team headed south on the 17th anniversary of the World Trade Center attacks that killed his 63-year-old dad and 342 more of their FDNY colleagues. Ray Downey was a departmental legend, a 39-year veteran and nationally recognized expert on rescue operations at collapsed buildings. His team responded to the bombings in Oklahoma City and the Atlanta Olympics.“I think all of us believe that we’ve got to do what’s right, and he wasn’t the only one from this team that was lost,” said Downey of his dad, adding that some 40 of their colleagues from the squad perished in the World Trade Center collapse. “I think it’s important that we carry on their legacy.”The National Weather Service said the powerful hurricane was expected to slam into the North Carolina coastline about 8 a.m. on Friday. Downey said his team was headed toward the likely area where the hurricane was headed, adding they will redeploy depending on its path.Downey, reflecting on that September morning in 2001, recalled the massive influx of help that descended on New York in the wake of the attacks. Though the Tuesday anniversary was “a tough day for the team,” Downey made it clear there was little hesitation about helping out in the Tar Heel State.“A lot of people came in on 9/11 to help us out, and we’ve done it the last couple of years, going to other places and helping them out,” said the second-generation smoke eater.