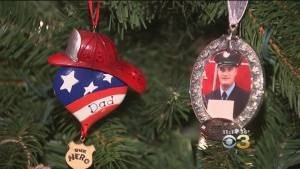 Philly Fire Engine 33 is helping the 10-year-old remember his father & honor his legacy with a unique collection effort.

These Christmas ornaments are precious indeed, but nowhere near as irreplaceable as the face that they frame.“It’s been weird not having him around,” said Evan Potter.

Evan’s father, Michael, died suddenly in January of 2016. He was a marine corps veteran & a proud Philadelphia firefighter.

For the holidays this year, Evan’s wish is simple, to fill up his board of fire company patches, to collect them just like his dad did.

“If we would go on vacation somewhere, he [Michael] always visited the fire station and got a patch or a tee shirt & he gave one from Philly,” said Amanda Potter, Evan’s mother.

Evans mom is going to make sure that Evan won’t see this story & for good reason, because here at Engine 33, they are working on a big holiday surprise.

“We heard that his son is really getting into the firefighter aspect & we talked to his mother Amanda, she agreed to let us make Christmas for them” said firefighter Charles Sgrillo.

Engine 33 put the word out about the patches & so far, Evan is going to need a bigger board.

“I had one guy offer me his whole collection that he has been collecting for 30 years,” said Sgrillo.

Firefighter Charles Sgrillo knew Michael Potter well, he hopes that word will spread & fire stations around the country will send in their patches so they can surprise Evan on Christmas Eve.

“Anything we could do we would love to do so at 10 maybe we are setting the path for a new firefighter of the future,” said Sgrillo.

“I want to be a firefighter like him to keep his memory alive,” said Evan.

Patches from fire companies near & far can be sent to Engine 33. The address is 4750 Richmond Street, Philadelphia, Pa – Care of ‘a 10 year old boy named Evan.’