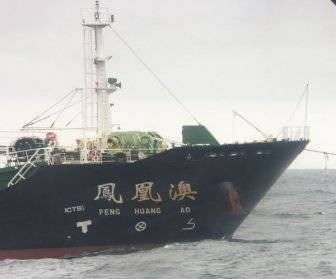 From the US Coast Guard:

NEW YORK — The U.S. Coast Guard and Fire Department of the City of New York (FDNY) Special Operations Command firefighters and Rescue Paramedics conducted a joint safety examination of a disabled 479-foot asphalt tanker Monday afternoon after a fire broke out in its engine room while underway in the Atlantic Ocean, Oct. 5.

The ship is loaded with asphalt and was bound for New York Harbor.

The fire was extinguished using the ship’s installed carbon dioxide fire suppression system. There were no reported injuries to any crew members, and no reports of pollution. The ship’s electrical generators and main engine were disabled by the fire.

Coast Guard Cutter Legare, a 270-foot Medium Endurance Cutter, homeported in Portsmouth, Va., was diverted to the area to assist the stricken vessel.

Inspection crews from Sector New York and FDNY boarded the vessel Monday afternoon to assess damage and ensure the ship’s safety prior to allowing entry into New York Harbor.

“This was a significant engine room fire that damaged a number of vessel systems, and we are fortunate there were no injuries,” said Capt. Jason Tama, commander of Coast Guard Sector New York. “Responding to this case required close coordination between numerous partner agencies and stakeholders to ensure the safety of the ship and the port, and to protect the environment. The assistance and expertise provided by FDNY marine firefighters was essential to the safe resolution of this case.”

“The Port Security Grant Program has funded many training evolutions for the FDNY, which has translated into the successful multi-agency execution during this live event,” said John Esposito, FDNY Chief of Special Operations. “The collaboration during this incident exemplifies the importance of strong relationships between the FDNY and the Coast Guard.”

The Feng Huang AO will remain in port until repairs are completed.

The cause of the vessel’s fire is under investigation.

Posted in FDNY, Fires, News
← Firefighter siblings to be promoted the same dayPatches for Evan →