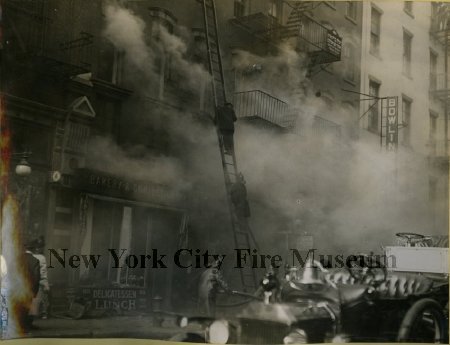 The 3rd floor of the Goodwin Bakery caught fire around 8pm. Within a very short time, the 3rd floor had spread throughout the 5 story bldg. The building & it’s contents were a total loss valued at $60k. Around 11pm, the building collapsed & buried several firemen. FF Slowey of Lafayette Engine 19 & FF Badger of Americus Engine 6 died of their injuries.

At about 7pm, all the lights in the quarters became extinguished through some trouble in the powerhouse. Fireman Wall fell through the pole hole & was rendered unconscious.

Lt Fletcher lost his life when he was overcome by smoke while fighting a 3 alarm fire in a building containing hats & frocks worth over a million dollars. In command of Rescue 1, he led his men into the smokey basement. He was brought out of the basement a few minutes later unconscious. Dr Harry Archer treated him for smoke inhalation. He regained consciousness & wanted to get back to work but Dr Archer ordered him to the hospital by Department ambualance. He died less than an hour later. Lt Fletcher lived in Woodside with his wife & 3 young children.

While responding to a 2 alarm fire, Ladder 131 was told people were trapped in the building. FF Devaney went into a 3rd floor apartment to search for a mother & her 2 children. He was in the room only a couple of seconds when it flashed over.

The intensity of the explosive flashover, over 2,000 degrees, melted his facemask & incinerated him. The mother & 2 children were found on the 4th floor. Firefighter Devaney, 36 years old was a 10 year veteran of the department & the chauffeur of Ladder 131. He had swapped positions with another firefighter for the tour.

Posted in Death, History, LODD, Uncategorized
← February 2nd in the FDNYFebruary 4th in the FDNY →