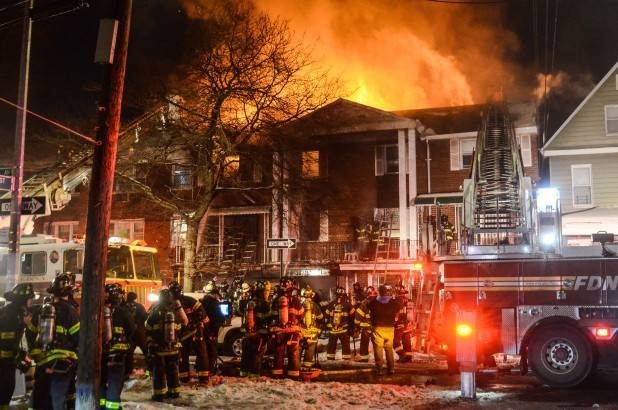 An FDNY arson dog found traces of accelerant on three gloves inside the car of Eric Chen, the owner of a building that burned down December 19th in Elmhurst Queens, leaving three people dead & four others injured.

Police & fire investigators were searching Chen’s home & Toyota 4Runner truck in Flushing Tuesday night when the canine made the discovery,

Police confiscated the truck, as well as digital recording equipment, a computer monitor & a hard drive. No arrests have been made in the case & no charges have been filed.

Chen, 29, purchased the home located at 90-31 48th Ave. in Elmhurst in February & has since tried to evict eight tenants who lived there. The deadly fire broke out in the early hours of Saturday the 19th. More than 140 FDNY personnel responded to the three-alarm blaze.

Records show that up to 60 people may have lived in that home at one time, one of the 26 open rapes in that residence of three homes. Most occurred before Chen bought the property.

Investigators said this week they were investigating whether the flames had been sparked after finding an accelerator on the property. Surveillance footage also showed an unidentified man entering the home & exiting shortly before the fire broke out.

Two men died behind a closed door on the second floor & another person died on the third floor of the house. Investigators also considered that it was an electrical fire.