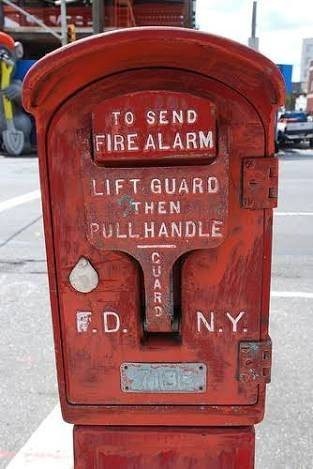 It is being reported that Boston Fire Dept responded to a working fire at 5:15a at Endicott Street in the North End, this response was initiated by Box Alarm Readout System (BARS). The media is refering to this system as ‘antiquated’, however, this morning there was widespread 911 outages in the Boston area. While it may appear to be antiquated, once again, the tried & true independant system has proven it’s worth in the Fire Service as firefighters arrived to heavy smoke pouring out of the building.

Every so often, the battle to keep the boxes comes up in New York City. For the mechanical boxes, when you pull it, it sends the box number to the Boro central office. Based on the box number, the specific assignment responds. Yes, they do not know what they are going to, but they are going. These boxes are independently powered at each boro central office. With the ERS boxes, you can push NYPD(blue button) or FDNY(red button) & verbally speak with the dispatcher to report the incident.

Yes, these days, everyone has a cell phone, but as proven this morning in Boston, modern technology doesn’t always work. In addition- 911, Fire & EMS dispatchers are overworked across the country.