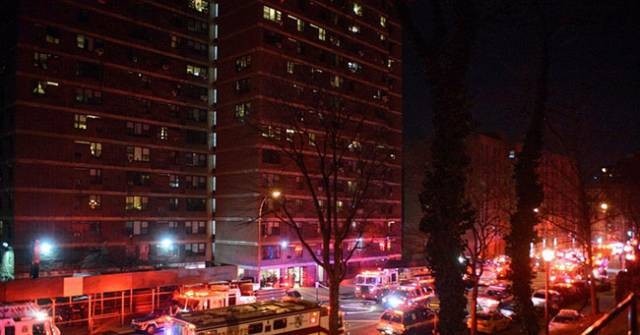 January 7th 1997 was a rather mild winter day, temperatures in the 40’s with wind gusts exceeding 30mph. These conditions would challenge firefighting operations in an afternoon fire.

Just after 2pm, Engine 40 responded to an EMS run at the Empire Hotel at West 64th Street & Broadway, Box 969. Up the block, a fire broke out in a high rise residential building.

Ladder 35 hit 10-84 (arrival) at 2:34pm; members could see smoke from the 28th floor of the 44 story high rise multiple dwelling V shaped. Upon entry to the lobby, members were met by a female claiming to be the house keeper of Lionel Hampton. She said the bedroom of the apartment 28K was on fire, the apartment door was closed and handed them the keys. Lt Gormley L-35, and his men proceeded to the elevator bank that serviced the upper floors. A keyed switch was found in the lobby and that recalled the elevators. FF James O’Donnell, L-35 OVM attempted to locate the elevator with the control key but none had it. The members entered the elevator and FF O’Donnell pressed 26th floor, 2 floors below the fire floor as per procedure. When they arrived, the doors opened to a smoke filled hallway. Members of Ladder 35 located the ‘You Are Here’ sign in the hallway then located Apt 26K to have an idea of where the apartment on the fire floor would be and where the stairs were located in relation to the ‘K’ line apartments. Lt Gormley decided the ‘V’ stair was closest to 28K and would be used as the ‘Attack’ stairway. The members proceeded up the stairs to the fire floor. FF O’Donnell stayed with the elevator and attempted to return to the lobby to pick up Engine 23. The elevator wasn’t in Fireman Service, it went up instead of down. FF O’Donnell was placed in a high heat and smoke environment and had to don his SCBA. The elevator brought him to the 43rd floor.

At 2:36pm, the 9th Battalion arrived to assume command. FF O’Donnell attempted to transmit from the 43rd floor to Chief Grosso in the lobby but the only person to hear his communications was FF Ed Santore, E-40 ECC, who arrived 3rd due coming from the EMS run. FF Santore relayed to Deputy Chief Dunn of the 3rd Division, the report by FF O’Donnell that conditions on the upper floors were deteriorating.

Upon reaching the stairway landing to the 28th floor, Lt Gormley felt the door for heat, it was hot to touch. This immediately indicated the apartment door was open, not closed. As soon as he opened the door, heavy black smoke and flame came out. The members of Ladder 35’s inside team masked up and attempted to enter the hallway. They were forced to the floor and only made it about 10 feet before they were forced back to the stairway in blow torch like conditions.

Engine 23 arrived with their roll ups and hooked up their 2 ½ inch handline with 1 1/8 straight tip nozzle. Capt McKeon and his Engine 23 nozzle team were ready to make the push down the hallway on the 28th floor, but the hoseline, delivering 250 gallons of water per minute was not enough to absorb the heat. Engine 23 was burned through their face mask. They retreated to the stairwell. Engine 74 arrived with a 2nd line to back up the 1st but were immediately ordered to relieve Engine 23. Lt Fitzgerald and Engine 40 arrived to take over the 2nd line. It was decided that both handlines would make a push together. Both nozzlemen, back to back, made entry with 2 open 2 ½ lines flowing water to absorb the heat in the hallway.

Meanwhile, on the 43rd floor, FF O’Donnell exited the elevator then immediately made his way to the freight elevator lobby which was isolated by a smoke door. He knew of this location because he oriented himself with the Inside team back on the 26th floor. While in this place of refuge, he heard screams for help. A female had left her apartment attempting to enter the stairs and evacuate, but became disoriented in the hallway. FF O’Donnell located and brought her to the freight elevator area, there was a medium smoke condition here but it was better than the hallway. FF O’Donnell knew he had to do something to relieve these conditions and his communication over the handie-talkie weren’t reaching the lobby command post. He left the freight elevator for the V stairway which was the closest. As soon as he exited the area, his vibra-alert went off indicating he had only a few minutes left of air. He reached the stair door, when he entered, he was met with heat and smoke. Thinking the roof had to be 1 flight up, he entered and ascended. 2 flights up, he found a penthouse occupied by a health club. Heading in the opposite direction from the Health Club, he located a door leading to the roof and fresh air. With the attack stair vertically vented, conditions in the stairwell and upper floors started to lift. FF Terry Holden, L-35 LCC, reached the top floor via Z stairwell, there he was able to contact FF O’Donnell. They teamed up, brought the female from the freight elevator to the roof and continue to vent the top floor and search apartments.

2 women in apartment 28O attempted to evacuate but were met with smoke and fire in the hallway. They immediately closed their apartment door and went to the window. At this point, the smoke and heat were in their apartment and they were in a state of panic at the window, 28 stories above ground. Lt Dennis Mojica and his Rescue 1 crew went to apartment 29O, gained entry, then lowered FF Stan Sussina via Life Saving Rope out the window to the 28th floor apt 28O. FF Sussina entered apt 28O window and stayed with the women to calm them. Masks were lowered for the victims, and they sheltered in place until they can be rescued via the hallway.

The 2 handlines operating together, were able to advance to the fire apartment and eventually extinguish all fires. This operation was an extremely difficult offensive attack. With 15 floors above the fire floor, numerous companies were need to search all floors and apartments above the fire area. This included a 5th Alarm assignment of 8 ladder companies and numerous special units.

This building was not equipped with a public address system. Had it been available, an announcement with instructions could have been relayed to the residents throughout the building. The building was constructed in the early 1970’s. Fireman Service feature on the elevators and a public address system were not required nor was it retroactive when finally enacted in the 1980’s.